Search for a Glomacs Course by Keywords

GLOMACS has a 30+ year track record of partnering with organizations to improve their business processes, develop skills and enhance the competencies of their existing workforce, while maximizing the effectiveness and productivity of their teams. By enrolling on a GLOMACS training course in Miami, you will learn from world-class international trainers who have decades of combined industry experience. Our training courses in Miami are designed by understanding the needs of the professionals and are ensured to to meet the personal and organizational needs.

View the complete portfolio of GLOMACS training courses in Miami below. 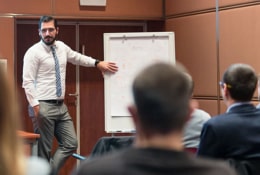 Miami is a major center, and a leader in finance, commerce, culture, media, entertainment, the arts, and international trade. It was once classified as an Alpha−World City in the World Cities Study Group's inventory. Miami was ranked seventh in the United States in terms of finance, commerce, culture, entertainment, fashion, education, and other sectors. Previously it was ranked 33rd among global cities. Forbes magazine ranked Miami "America's Cleanest City", for its year-round good air quality, vast green spaces, clean drinking water, clean streets, and city-wide recycling programs.

Downtown Miami is home to the largest concentration of international banks in the United States, and many large national and international companies. The Civic Center is a major center for hospitals, research institutes, medical centers, and biotechnology industries. For more than two decades, the Port of Miami, known as the "Cruise Capital of the World", has been the number one cruise passenger port in the world.

About Us
Quick Links
Downloads
Follow Us:
Copyright © GLOMACS 2023.

HIDE
LinkedIn
Facebook
Twitter
WhatsApp
Email
Other
Sharing
Our training courses in Miami are designed by understanding the needs of the professionals and are ensured to to meet the personal and organizational needs.https://glomacs.com/wp-content/themes/glomacs-2022/img/social-media.jpg
Best services